Chromatic dispersion is the phenomenon where the velocity of an electromagnetic wave propagating through a medium will depend on the frequency (or wavelength) of the wave.

Consequently, light of different wavelength will propagate at slightly different speed through a dispersive medium. Or, in other words, having a refractive index depending on the wavelength of the wave.

A medium is said to have normal dispersion if the refractive index decreases with increasing wavelength (i.e. red light propagating faster than blue light).

If the refractive index increases with increasing wavelength, the dispersion is said to be anomalous.

The optical fibre consists of silica glass. The waveguide properties are accomplished by giving the core of the fibre a slightly different refractive index than the cladding.

Since a modulated light cannot be perfectly monochromatic, fibre dispersion will cause widening (in time) of light pulses propagating down the fibre (see figure below). Basically, the “blue” part of the pulse will travel faster down the fibre than the “red” part. This phenomenon causes reduced receiver sensitivity and eventually bit errors in the digital data stream. 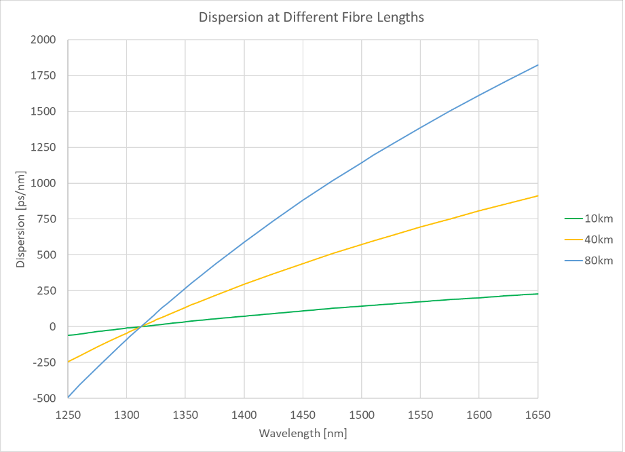 Some things are worth noticing:

The negative impact of dispersion on fibre optical transmission around 1550nm becomes more serious with increasing bit rate because a) the pulses representing data bits are shorter and b) high modulation rate will widen the spectrum of the signal.

The fibre dispersion sets a practical limit for 10Gbps NRZ transmission to about 80km. For amplified networks spanning longer distances, the dispersion must be compensated for (by introducing Dispersion Compensation Modules – DCMs – into the network).

When making power budget calculations, it is mandatory to take the penalty introduced by dispersion into account. For an 80km 10G NRZ link operating at 1550nm, typically 2-3dB should be subtracted from the available power budget.

At higher data rates than 10G, it is beneficial to use transmission as 1310nm to reduce the impact of fibre dispersion. Other techniques, such as Forward Error Correction (FEC) encoding can also be used.