Today, global bandwidth requirements are increasing by 25-50% each year and current facilities operating at 10G or 40G are not sufficient to meet this huge demand and rapid scalability requirement.

Currently, the most common way to send data with light is accomplished by simple amplitude modulation (on-off keying OOK). This means that the light is turned on and off to send data. But this simple way of doing things has reached its limits because we can’t turn the light on and off fast enough to increase the data transmission rate. So the industry has been looking for more sophisticated ways to modulate light. Many other proven modulation techniques already exist in the RF transmission world. The industry is therefore applying and adapting some of these techniques to modulate light. Coherent optics brings these techniques together by using the various properties of light to send more data. These key properties of light are its amplitude, phase and polarization.

Coherent technology uses the three degrees of freedom (amplitude, phase and polarization of light) to focus more data on the wave that is being transmitted. In this way, we can achieve much higher bit rates on a single wavelength with coherent modulation. To achieve this goal, we need a coherent optical engine (coherent transmitter and receiver) supported by a sophisticated piece of electronics to do the job. This is the role of the DSP (Digital Signal Processor). This DSP has various functionalities such as chromatic dispersion compensation (CD), polarization mode dispersion compensation (PMD), non-linearities compensation, symbol clock recovery, carrier phase recovery, frequency offset compensation, symbol detection, polarization demultiplexing… 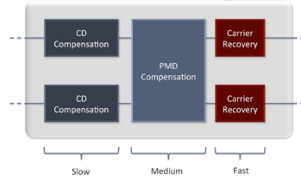 All of these features will allow greater flexibility in line rates, with scalability from 100G to 400G and beyond per single signal carrier.

QPSK stands for Quadrature Phase Shift Keying. In the field of fiber optics, it is to shift the phase of the light wave according to four different possibilities while maintaining the fixed amplitude. QPSK is synonymous with 4QAM where QAM means quadrature amplitude modulation and where we do not play with the amplitude of the signal. The technology allows you to add more and more phase and amplitude levels to reach 8QAM, 16QM, 32QAM and even 64QAM. The more levels you add, the higher the bit rates you can achieve. For example, 64QAM contains 6 bits per symbol. This means that a bit rate of 100 GBaud/s would correspond to the transmission of a 600 Gbit/s signal with OOK, which is technically impossible.

In summary, coherent optical technology has the following advantages:

Source: Ciena, What is Coherent Optics

Articles / 22.06.2021
OEC, our Optics Excellence Center, is where we study our transceivers with a fine-tooth comb.

OEC, our Optics Excellence Center, is where we study our transceivers with a fine-tooth comb.